The first glance between a bride and groom on their wedding day, be it during the “first look” or as the bride walks down the aisle, is both emotional and memorable.  On November 20th, 2016, Zoe and Darren tied knot at the Hyatt Regency Grand Cypress. The couple decided to have a first look before the wedding ceremony. As the bride made her way down the elevator to her awaiting groom, the photographer had to find a way to stall the groom. They started to ask Darren some questions, to test the microphone for the video.

One of the questions he was asked was how he was feeling. There could not have been a better answer. He did not have to think twice as he answered. “The guys keep making comments about how this is my last morning as a free man, and all I kept thinking is that 11 o’clock cannot get here fast enough.” Zoe and Darren have been together for many years already, and he was beyond ready to make it official. When Zoe exited the elevator, Darren was blown away and greeted her with teary eyes.

Zoe’s dress was perfect and unique to her and seemed to fit her personally. Not completely white, the dress had beautiful black designs that seemed to tie her whole look together. Perfection is the only way to describe it.

Their ceremony and reception were held at the Hyatt Regency Grand Cypress. The ceremony was held outside and the weather could not have been better. However, it was the reception that took your breath away. Deep purples adorned the room, adding pops of color. The venue space had floor to ceiling windows, which allowed to plenty of natural light.

For some couples, choosing the bridal party is difficult. But for Zoe and Darren there was only one choice for the best man. He was unlike any other best man; he was definitely a hit with planners. The best man was their dog, Aiko. He was positively adorable in his little tux.

Following a magical reception, Zoe and Darren were treated to a Bubble exit as they headed off to their new life as husband and wife. 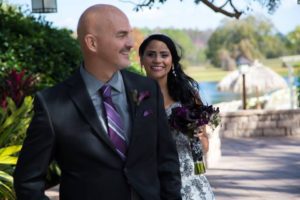 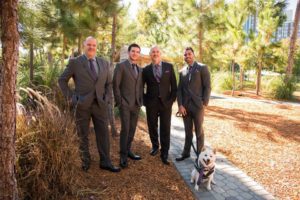 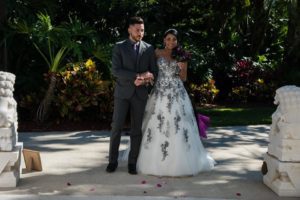 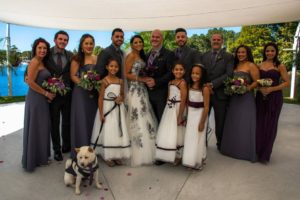 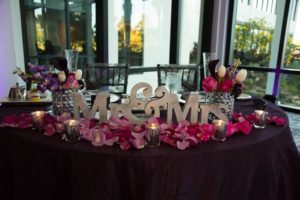 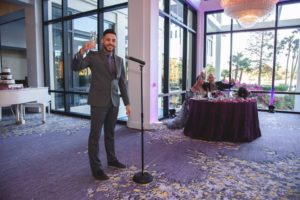 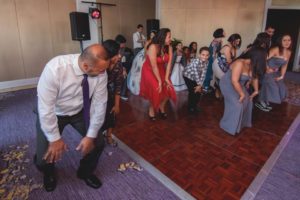 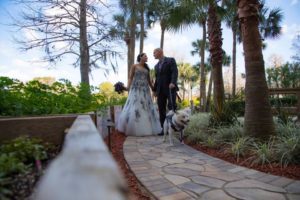 Floral: I Do Events & Party Rentals

Hair and Make up: Bride Spa